The diesel engine aftermarket offers a seemingly endless supply of products designed to deliver performance, improve fuel efficiency and add horsepower and torque. Some work better than others, but the following is a list of 10 modifications proven to make a difference.

New vehicle Original Equipment Manufacturer (OEM) engineers calibrate the engine to meet emissions standards required by the Environmental Protection Agency (EPA), achieve fuel economy requirements and optimize resilience. While these settings are selected based on many factors, they are often set below peak horsepower and torque values and may be modified from the factory limits to improve engine performance.

One method for changing diesel engine parameters uses an aftermarket computer calibration module. These devices increase performance by adjusting the quantity, pressure and timing of fuel injected into the cylinder.

Numerous aftermarket power modules and chips are available that modify the ECM, permitting the driver to manually select engine settings for the desired performance.

For vehicles without removable chips, the ECM can be removed and re-programmed by a reputable re-flash company to optimize the fuel and timing curves throughout the entire powerband. The reprogramming process, done in a few minutes, directs the ECM to allow more fuel, air intake and turbo boost during the compression stroke and optimize transmission shift timing. 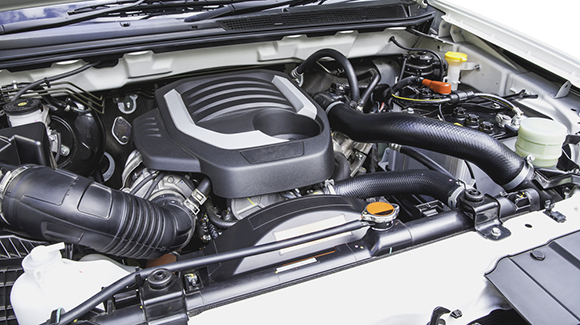 When augmenting the engine horsepower output, the increased torque must not exceed the transmission’s Nominal Torque Capacity Rating. In a new vehicle, the OEM matches the transmission to the programmed engine power ratings to prevent damage. Exceeding those ratings puts the transmission at risk.

For the do-it-yourselfer who enjoys fine-tuning the engine, the aftermarket offers a wide range of programming devices. The best programs include software with tutorials or guides that explain each step in detail. Many of them include a built-in scan tool that will read and clear diagnostic codes.

A diesel turbocharger increases performance by forcing more air into the engine than normal. The principal component is a turbine driven by the vehicle’s exhaust gases and a compressor that pressurizes the air intake and then force-feeds it to the engine, dramatically increasing engine performance. A stock turbo is designed to increase airflow or boost, measured in pounds per square inch (psi), three to four times over a naturally aspirated engine. A high-performance turbo can boost airflow five to 10 times. An upgraded turbo increases the efficiency and performance of the engine by keeping exhaust gas temperature down.

If a modification is made to the ECM increasing fuel flow to the cylinders without boosting the air flow via a turbo, the engine will operate less efficiently by burning more fuel, creating higher exhaust temperatures (EGT) and dramatically lowering fuel economy.

The optimal design is a twin turbo setup that includes a smaller turbo for most normal driving speeds and a larger one for higher speed and torque situations.

Superchargers offer an alternative method for increasing performance to the dual turbo design. While turbochargers operate at 15,000 rpm, the Supercharger spins at roughly 50,000 rpm. It is directly connected to the engine’s crankshaft with a chain or belt and uses no exhaust gasses for an energy source. The direct connection means a Supercharger has no lag and can supply constant boost even at low engine rpm, adding a potential 40 to 45 percent more horsepower to an engine.

Diesel engines come from the manufacturer with restricted air intake openings and sound baffles that reduce noise but impede air flow. The baffle can be removed to allow more air into the combustion chamber.

In a typical OEM configuration, the intake draws air from the radiator bulkhead or from beneath the front fender. Modification of the intake to pull air from a source outside of the engine housing will permit colder air to enter. Cold air is denser and contains more oxygen for burning during compression.

Several aftermarket companies offer complete high-flow air intake kits that will replace the entire OEM airbox. These kits typically include a filter made from synthetic fiber or oiled or cotton-gauze that, even when grimy, will flow more air than the stock low-quality paper element.

An upgrade to the air intake system results in better air/fuel ratios, can generate a 20 to 30 percent increase in horsepower and improves fuel economy.

Increasing the power output of a diesel engine ideally involves the upgrade of several components, like fuel injectors, that work well together to achieve the desired horsepower and torque.

Once the ECM or modules are upgraded and the air flow is increased using a turbo, a change to aftermarket injectors should be the next consideration. Many injectors offered in the aftermarket use stock units that are reworked to flow more fuel at a given setting. It is critical to match the injector to the desired horsepower level and the other upgraded components. The power level will dictate the injector’s ideal operating point and optimal performance level, providing neither too much nor too little fuel to the cylinders. Burning too much free-flowing fuel reduces fuel efficiency and puts undue stress on the engine.

Many older diesel engines from the ‘80s or ‘90s use an indirect injection (IDI) system. Fuel is mixed with high-pressure air in a precombustion chamber and ignited with a glow plug. When the valve opens, the explosion shoots through the injector nozzle and expands in the bowl-shaped chamber on top of the piston. The process requires a high-pressure injection pump.

A more fuel-efficient system than IDI uses direct injection (DI) technology in combination with an ECM. A precisely metered amount of fuel is injected directly into the combustion chamber at the top of the piston. A precombustion chamber is not required since pressures are already extremely high.

The DI system can be upgraded by tweaking the ECM. Modifications to the injector open and close frequencies and the quantity of fuel sprayed per cycle will yield more horsepower. DI offers several advantages over IDI including higher thermal efficiency, vibration, noise, fuel economy and overall superior engine performance.

The intercooler is another important component that should be upgraded to match other diesel engine upgrades, most importantly the turbo. Optimum performance comes from matching all the components.

In a turbodiesel engine system, the intercooler is designed to maintain the boost pressure after leaving the turbo while simultaneously cooling the air before it reaches the combustion chamber. Colder air is denser and contains more oxygen, which burns more fuel during combustion, leading to more horsepower.

The intercooler is a heat exchanger that follows the basic principles of heat transfer: The greater the surface area, the more efficiently it cools. OEM stock intercoolers are designed for stock diesel engines. However, when the engine performance attributes are upgraded by replacing components, the stock intercooler may be insufficient to match and can therefore limit performance.

An upgrade to an aftermarket intercooler may be required. Most are single-piece, fin-type models, made of aluminum, with bigger inlets and outlets as well as an expanded grill and radiator to provide greater airflow than the stock device. For a turbo setup conversion or a swap to a bigger turbo, appropriate intercooler selection is critical.

The diesel engine exhaust system is designed to reduce engine heat and expel post-combustion gasses with emphasis on noise reduction versus performance.

The stock mufflers and exhaust tubes on a truck typically use a small-diameter pipe. These pipes have some tricky bends and kinks, which makes your engine work harder to push the exhaust gases through quickly and easily. 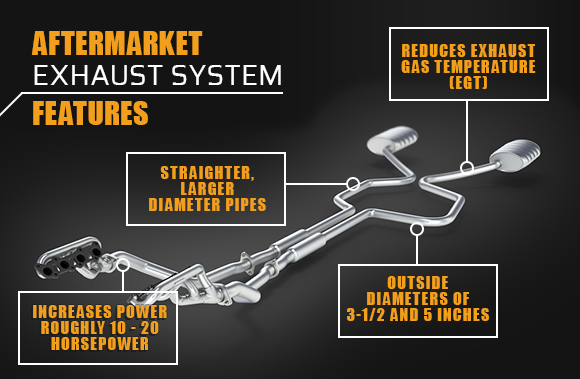 You can find aftermarket exhaust system features without these pipe tube oddities. Aftermarket pipes have straighter, larger diameter pipes. Most of them come with outside diameters of 3-1/2 and 5 inches, with few bends and turns. This reduces resistance and allows the gasses to exit quickly and efficiently.

A high-flow exhaust system provides the benefits of improved sound and the capacity to support improved horsepower and torque. It also helps keep the exhaust gas temperature (EGT) down, which adds to the overall performance and promotes engine life.

A high-flow exhaust system is essential to a diesel engine performance upgrade that includes a change of computer chips, electronic programmers or turbocharger. These upgrades recalibrate the engine air/fuel mixture to produce more power and improve overall performance. However, the additional heat and exhaust gas created can exceed the amounts a stock exhaust system is designed to handle effectively.

An upgrade to an aftermarket exhaust and muffler kit will reduce exhaust gas temperature (EGT), improve torque and increase power roughly 10 to 20 horsepower.

One point of potential failure that is often neglected when adding more power to a diesel engine is the transmission. The stock OEM transmission in a truck is designed for stock power output. Once the other components have been upgraded, producing more power and torque, the stock transmission is no longer the ideal fit.

Although torque converters can handle a fair amount of abuse, with excessive torque, horsepower and load, the converter clutch can slip, producing friction and heat. The converter can eventually deform and fail.

High-performance converters are typically built using a billet or stronger steel shell to withstand higher internal temperatures and abuse, and they are designed with multiple clutch discs that prevent slippage, clutch surface deterioration and significantly improve the converter’s clutch-holding power.

A simple torque converter may be inadequate for some horsepower and torque upgrades, making a higher performance transmission necessary. Transmissions built for extreme duty are usually equipped with more clutch plates to handle high horsepower and heavy loads and prevent slippage during transmission shifts.

Installing an aftermarket or rebuilding the stock transmission makes a lot of sense.

There is an abundance of fuel additives on the market. Some of them make ambitious and perhaps unrealistic claims of power gains from using their product, while others suggest a more reasonable increase of 20 horsepower.

Fuel additives are chemical compounds that mix with diesel fuel to promote a cleaner burning combustion. They are designed to clear out impurities, decrease friction, remove engine sludge and stabilize the fuel. Some blends of diesel fuel and various additives will improve fuel efficiency and improve output by roughly 10 horsepower.

Some additives contain cetane, the diesel equivalent of octane. A higher cetane rating in the fuel has a noticeable effect on how the fuel burns in the combustion chamber, resulting in a smoother and quieter engine that runs with noticeably more power.

In a cold diesel engine, compression alone may not be sufficient to produce the self-ignition temperature. A pre-glow system is therefore required to increase the temperature of the compressed air and facilitate firing. The required duration of pre-glowing depends on both the engine and ambient temperatures.

Replacement will assure that they do not affect the other performance enhancing components.

While most of the modifications made to a diesel engine will cause it to produce more power, they also place greater demands on the vehicle’s systems. Well-designed gauges permit monitoring these systems and allow the identification of problems before they can cause serious damage.

Excessive exhaust gas temperature may pose the biggest risk of damage to a modified engine but can be observed with a pyrometer. The gauge uses a thermocouple probe that can be installed either behind the turbine outlet on the turbocharger or on the exhaust manifold that monitors EGT levels.

Any deviation from the standard operating temperature of a transmission is an indicator of potential problems. A simple temperature gauge is well worth the investment and could help avoid a blown transmission and expensive repair.

These are just a few of the many ways to upgrade diesel engine performance. These modifications place additional stress on all internal and ancillary mechanisms. Perhaps the most important factor for any upgrade is the coordination and compatibility of the upgrade components. Only then can the engine operate at maximum efficiency and peak performance without excessive risk of damage.