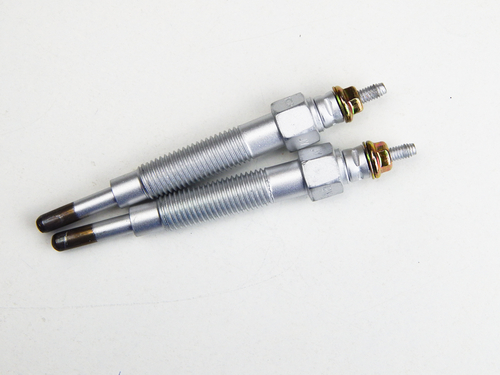 If you have just purchased a vehicle with a diesel engine or you are considering buying one, one of the most critical components to become familiar with are glow plugs. Although you need not be a mechanic, some rudimentary knowledge of what they are and how they work will assist you in keeping your vehicle in peak operating condition.

Diesel engines are notorious for their unfortunate “I do not want to start” reputation during the winter months. Many times, a person will turn the key and face the dreaded “minute of silence” only other diesel owners seem to understand. The heat generated within the engine is rarely sufficient to start the engine on its own.

How Do Glow Plugs Work?

With the combustion chambers missing the necessary heat and increasing heat loss from the air uptake and cold cylinders, these heat losses through the cold cylinders and the air intake impede the self-ignition. Therefore, they are unable to obtain the temperature necessary without adding heat.

Engines require three things to work correctly: oxygen, fuel, and an ignition point. The ignition point is provided by the glow plug as it heats the element. Most glow plugs contain a 1.5-volt battery housed within the glow ignitor. Many newer model engines use batteries capable of igniting the plugs as part of the electrical starting system.

Keeping the element hot after ignition depends wholly on the element’s material and the type of fuel used.

To start reliably in cold weather temperatures or when the engine is cool, vehicles with diesel engines require support from glow plugs. When you attempt to start the engine, both the engine and the cylinders have significantly cooled to ambient room temperature.

Once this happens, self-ignition is not possible because air compression does not allow the proper temperature to be reached. The key must be turned to the “start” position until the time allotted by the manufacturer elapses.

From their screwed-on position on the cylinder head, this is where glow plugs are called into action. The tube protrudes into the combustion chamber and begins the heating process the moment current is supplied. Depending on the type of glow plug, temperatures may reach more than 1000°C. This is the “pre-glowing” procedure:

After the vehicle starts, the glow plugs continue to work while the engine is in operation. By doing this, cold-start knocking is eliminated, and bluish-white smoke levels reduce significantly. Since the glow plugs are self-regulating, when the temperature increases in the engine, they limit the amount of current flowing to protect themselves against overheating.

However, while the engine is running, the voltage intensifies. Certain glow plugs may burn through during the operating cycle. Additionally, there is also exposure to combustion temperatures internally, and heating also happens from the outside.

The interior of metal rod glow plugs contains a heating coil within a metal, heat-resistant glow rod. Magnesium oxide, a ceramic material, protects the coil from shocks and vibrations. Being a terrific thermal conductor, any heat produced quickly dissipates outward.

There are four different rod glow plug types: self-regulating, quick glow system, quick start, and standard. None of them are interchangeable, so it is important to know which glow plug is specific to your vehicle.

There is an extremely high melting point with ceramic glow plugs. They are sheathed in silicon nitrate, and it is the combination of sheath and heating coil which allows for fast preheating and increased temperature ability. This type of glow plug has a more compact design than its metal counterpart, saving valuable room under the hood’s premium real estate.

Deciding on the correct glow plug is vital to achieving the best performance your engine is capable of. Every vehicle is different, and so are the glow plugs recommended by the manufacturer. Factors that influence the type of glow plug used include air temperature, air-fuel mix, the engine type, and nitro percentage.

Cold plugs do not provide the acceleration and idle that hot plugs do. While they do produce more power overall, they are difficult to tune and tend to idle roughly.

Glow plugs may be small, but they have an important job. You are counting on them to come through for you.  Your engine needs them in order to get your vehicle started  and keep it running with no problems. Always purchase the best-quality glow plugs that you can afford.

Glow plugs are inexpensive and easy to replace—and they will help extend the lifetime of your engine!